The Wisconsin Soccer Hall of Fame will welcome eight new members at its second annual dinner and induction ceremony Saturday at Monona Terrace in Madison.

Saturday's event, being held in conjunction with the WSL and WYSA annual general meetings, starts with cocktails at 4:30 p.m. and the ceremony at 5:30 p.m. Here's a look at this year's Wisconsin Soccer Hall of Fame inductees:

Carlson played at Madison West High School, helping the Regents earn a spot in the inaugural WIAA state tournament in 1982. The forward also played for Madison United SC, then joined the Madison 56ers – in his time with the 56ers, the team appeared in 11 consecutive WSA state finals and won three Major Division titles, four State Open Cup championships, two State Amateur Cups, two U.S. Adult Soccer Association Region II Amateur Cups and the National Amateur Cup in 1992. As coach, he guided the West boys to a WIAA state runner-up finish in 1990 and also led the Madison Edgewood girls program, and and currently holds several positions with the state organization. He is the WYSA associate director of coaching, the director of coaching for the Wisconsin Olympic Development Program and a national coaching staff instructor. Carlson, who lives in Madison and holds a U.S. Soccer Federation "A" license, also was the state girls ODP head coach and a member of the coaching staff for the U.S. Youth Soccer Region ODP program.

Coan, a native of Lansing, Mich., has coached at nearly every level of girls and women's soccer in Wisconsin during a career that has stretched more than 30 years. He's been part of the Kimberly, Kaukauna and Oshkosh North high school programs, Paper Valley YSC (now Neenah SC), the state ODP program and state college teams, including NCAA Division I UW-Green Bay and Division III Lawrence and Marian. For the past four years, he's been an assistant at Division II Michigan Tech, working with head coach Michelle Jacob (Neenah/UW-Stevens Point) to build the Huskies' program from its inception. Coan was named the National Soccer Coaches Association of America National Competitive Youth Girls Coach of the Year in 2005, and served as the NSCAA's state technical director for NSCAA from 2004 to '11.

Jaworski, a native of Flossmoor, Ill., had a great career as a player: The defender had 16 assists in his three seasons with the University of Wisconsin from 1984 to '86 – he's tied for 10th in program history in that category – wore the captain's armband for his final two years with the Badgers and was part of the 56ers' successful sides in the 1980s and '90s along with fellow inductee Carlson. Yet he's better known for his contributions following his playing days, as he's considered by many coaches, players and fellow referees to be the top official in the Madison area. A U.S. Soccer Federation Grade 5 and NISOA national referee, he has overseen NCAA Division I and Division III, National Premier Soccer League and WSL Major League matches. Jaworski was inducted into the Madison Area Soccer Hall of Fame in 2014.

Johns didn't play soccer at Oconomowoc High School, because the school didn't offer the sport before he graduated in 1976, and had no soccer experience when he walked on at UW-Milwaukee as a sophomore. But he ended up as one of the top goalkeepers in Panthers history and played 15 seasons of pro soccer. Johns posted a 0.73 goals-against average in his three seasons at UWM, which still stands as a program record, he ranks second in team history in shutouts (19) and saves (318) and he has two of the school's five longest shutout streaks. He started his pro career outdoors with the Edmonton Drillers (1980 to '82) and Vancouver Whitecaps (1983), then moved indoors and played for the Whitecaps, Cleveland Force, Tacoma Stars, Cleveland Crunch, Canton Invaders and Pittsburgh Stingers before retiring in 1995 at the age of 38. Johns, who resides in Silver Lake, Ohio, and coaches high school soccer, also was a part of the U.S. team that finished second at the 1992 FIFA Futsal World Championship in Hong Kong – that's the best finish for any American men's team at a FIFA championship event.

Kreitmeir found individual and team success at every level. He won 12 state titles as a youth player at Bavarian SC, was the 1989 Gatorade Wisconsin Player of the Year and a prep All-American while at Brookfield Central High School, participated in three U.S. Olympic Festivals and played for the U.S. Under-20 national team and at UW-Milwaukee. After one season with the Panthers, he signed with 1860 Munich in 1991 and played with the German second-division club through '93. He then returned to Wisconsin, joining the Milwaukee Rampage, and was named to the USISL All-Star team in 1994. Kreitmeir was part of the Milwaukee Wave's National Professional Soccer League-winning team in the 1996-97 season and helped the Bavarians claim three consecutive National Amateur Cup titles  from 2001 to '03 – the last of those was a double, as they also won the U.S. Open Cup that year. He now coaches at SC Waukesha, after coaching at Brookfield SC in the late 1990s.

Lekan spent more than 30 years as a coach or administrator in New Berlin and the surrounding areas, including stints with the Croatian Eagles in Franklin and Spring City SC in Waukesha. He served as the director of the Wisconsin Competitive Girl's Soccer League and later the boys and girls state Premier Leagues, held several administrative roles with the Metro League and was the WYSA vice president.

Mariahazy grew up in the Chicago area and got involved with soccer in Wisconsin shortly after his family moved to Menasha in 1990. A former coach and certified referee, he served on the Board of Directors for Menasha Area SC, including a stint as the club president, during which time he negotiated a 50-year lease for the club's main complex along with a land-use agreement with the city to add three more soccer fields. Mariahazy joined WYSA in 2000 as the organization's sanctioning director, then was elected treasurer in 2001 and vice president in 2006. He became WYSA president later in 2006 and still holds that position, and also has served on several U.S. Youth Soccer national committees.

A San Francisco native who now lives in Waukesha, Sweeney has been a soccer coach and administrator since the late 1970s and has refereed high school matches since 1990. He started the Marquette University women's club team in 1980 and led the team to a 201-53-23 record over the next 10 years, and has been a mainstay with Milwaukee Kickers SC. Sweeney was the WYSA Girls Coach of the Year in 2007 for his work with the Tosa Kickers teams and led several other youth teams to state titles, and also was involved in the Kickers' adult programs. He ran the club's Over-30 adult recreational league from 1985 to 2005 and oversaw their Majors and Reserves teams from 2008 to'13, and also guided the Kickers' Under-20 men's team to the USASA national championship in 2009.

The Hall of Fame committee also will present two Gene Edwards Special Recognition Awards this year: to the Mesdjian family, whose members have long been players, coaches and referees in the Madison area, and to Eric Anderson, owner and publisher of Wisconsin Soccer Central. 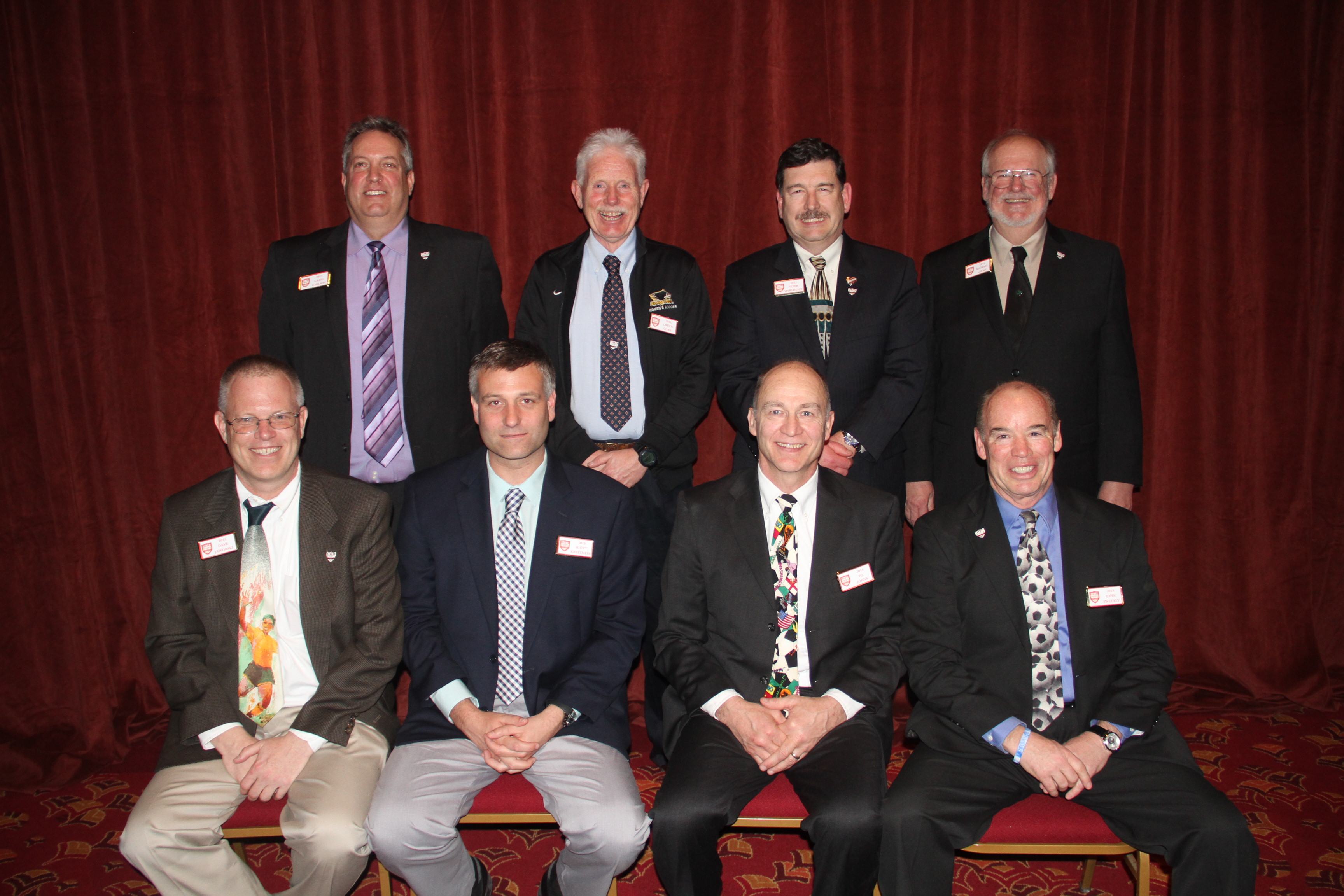 The Wisconsin Soccer Hall of Fame Class of 2015 at the induction ceremony March 14 at Monona Terrace in Madison.