MILWAUKEE – The scoreboard showed that Premier League side Swansea City and popular Mexican club Club Deportivo Guadalajara tied 1-1 in a preseason friendly Wednesday night at Miller Park, but it was pretty clear there was a winner in the first professional outdoor soccer match in Wisconsin in nearly nine years.

That would be the 31,237 fans who turned out for the game, which wasn't settled until Chivas' Giovani Hernandez converted from the spot in the final seconds of second-half stoppage time following a questionable penalty call. Nathan Dyer had given Swansea the lead on a deflected shot in the 57th minute.

"It was fantastic out there," Swans midfielder Leon Britton said of the crowd, which likely was the largest for a soccer match in state history. "I thought the stadium and the venue's a brilliant venue. All the players in the changing room loved playing out there today. It was a fantastic atmosphere."

The first soccer game at Miller Park was the first time two pro outdoor teams met on Wisconsin soil since Sept. 10, 2005, when the Chicago Fire beat Milwaukee Wave United 4-1 in a friendly at Uihlein Soccer Park in Milwaukee.

"It was a great game, beautiful stadium, great team that we went against," Chivas goalkeeper Antonio Rodriguez said after his team's final tuneup before Sunday's Liga MX Apertura opener against Jaguares at home at Estadio Omnilife. "It was a tie, but it works. It was a nice game for us."

The teams played the final 10 minutes with 10 players apiece after Swansea defender Neil Taylor and Chivas midfielder Jesus Sanchez were both sent off by American referee Andres Pfefferkorn following a scuffle – the red cards were a bit surprising considering the players' actions and the fact that this was a friendly.

"You use the term friendly, but I think in football, it's always competitive. You want to win the game," Britton said. "Out there, you see two teams who wanted to win. Yeah, there were afew tackles flying in and a few cards and a few incidents, but it was good spirit out there in the end."

"There's no such thing as a friendly, is there? No," Swansea manager Garry Monk added following his team's first preseason match.

"It was good for us – obviously, Chivas were a little bit further ahead of us in terms of their preseason, so considering we've only been doing it for a week and a half, in terms of our preseason, I thought the boys were great. ... All in all, I think it was a good game overall. But I'm happy with the work that we've done."

Swansea had the better of the play in the opening 45 minutes, but their best chances were astray of the goal or snuffed out by Rodriguez.

Striker Bafetimbi Gomis, signed on a free from French club Lyon in June, fired over the crossbar in the 6th minute after youngster Alex Bray shook free on the right flank and played in a cross. Gomis was taken down just outside the box in the 26th, but Jonjo Shelvey's ensuing free kick clipped the crossbar and went over the goal.

The 19-year-old Bray got in on the left side in the 43rd, but Rodriguez slid out to clear the danger, and the keeper made a diving save on Shelvey's rocket of a free kick from 30 yards out in the final minute of regular time before the break.

Lukasz Fabianski, who joined Swansea City during the offseason after eight seasons at Arsenal, wasn't nearly as busy as Rodriguez. Fabianski turned aside shots by Angel Reyna and Fernando Arce to keep Chivas scoreless in the first half.

"I think it was a good first game for me as a Swansea City player," Fabianski said. "The main thing for me as a goalkeeper is always to keep a clean sheet, so I'm happy with that. There were, I think, two saves that I had to make, one was a bit harder the other one was easier. But overall, I'm pleased with the clean sheet."

Both teams changed out all 11 players at the interval, and Swansea finally found the breakthrough 12 minutes after the restart.

Taylor stepped in front of a pass on the left side and found striker Marvin Emnes, who quickly relayed the ball to Dyer near the D at the top of the box. He touched the ball around Edgar Solis and shot, with the ball deflecting off the Chivas defender and past goalkeeper Luis Ernesto Michel for the opening goal.

Chivas nearly found the equalizer in the 89th minute, as Sergio Napoles played a cross in from the left that Alberto Garcia touched on to Carlos Fierro, but his first-time flick from 10 yards out was wide of Gerhard Tremmel's goal.

A minute later, as the final seconds ticked away, Swansea's Adam King was booked for fouling Napoles about 30 yards out on the left side. On the ensuing free kick, Pfefferkorn ruled that Jazz Richards took down Kristian Alvarez on the right side of the box and pointed to the spot.

The left-footed Hernandez dispatched the penalty to the left side while Tremmell dove right, leaving honors even on the night and sending the pro-Chivas crowd home happy.

"It's important for us, the result, but it's not the main point in that type of game," Rodriguez said of the final score in the friendly. "On Sunday, we need to win."

Monk's team, meanwhile, plays Minnesota United FC of the North American Soccer League in another friendly on Saturday in Blaine, Minn., as its preseason continues.

"I thought the players did very well, especially second half," said Monk, a former center back who retired to take over as manager after Michael Laudrup was dismissed in February. "We controlled the game, never looked in any real danger. If anything, we looked like we were going to get a second goal and maybe three, but it wasn't to be. Some harsh decisions, but that's football."

Fabianski joined Swansea after spending the past few seasons as Arsenal's No. 2 keeper behind fellow Pole Wojciech Szczesny.

With the Swans, he faces another battle with incumbent Michel Vorm – Monk gave Vorm some time off before re-joining the team after he was part of the Netherlands side that won the third-place match at the World Cup on Saturday in Brazil.

"It's always going to be a battle; no one will give you just like that the No. 1 spot," Fabianski said in the mixed zone. "So I think it's always good to have competition. I think it will only help the team itself and as goalkeepers as well, because we're going to push each other hard and we can only get better with that."

Fabianski, who was in goal for Arsenal during the team's run to the FA Cup title last season, acknowledged the fighting for playing time is nothing new.

Swansea center back Ashley Williams left the team before the match and flew home to Wales to attend to a family situation. ... Many of the fans supporting Swansea were from North Shore United – the Cedarburg-based club has a partnership with the Premier League club. "It was nice to see the Swansea fans out there in the shirts, obviously, outnumbered," Monk said. "But when you've seen where Swansea have come from – and obviously I've seen that journey – to even think of being in America and being recognized as a team and everything, it just shows how far we've come." ... Swansea City, which finished 12th in the Premier League last season, opens the season on Aug. 16 against Manchester United at Old Trafford. "I think we'll be fine. I'm confident in this group," said Monk, whose team finished 12th in the league last season. "We're obviously added to the quality to this group, as well. We've got players from the World Cup coming back when we go back to the U.K. Obviously, one or two or three more signings to add to the quality of the group. I think we'll go into the season, hopefully hit the ground running and have a good season." ... Madison's Chris Ruska served as the fourth official. 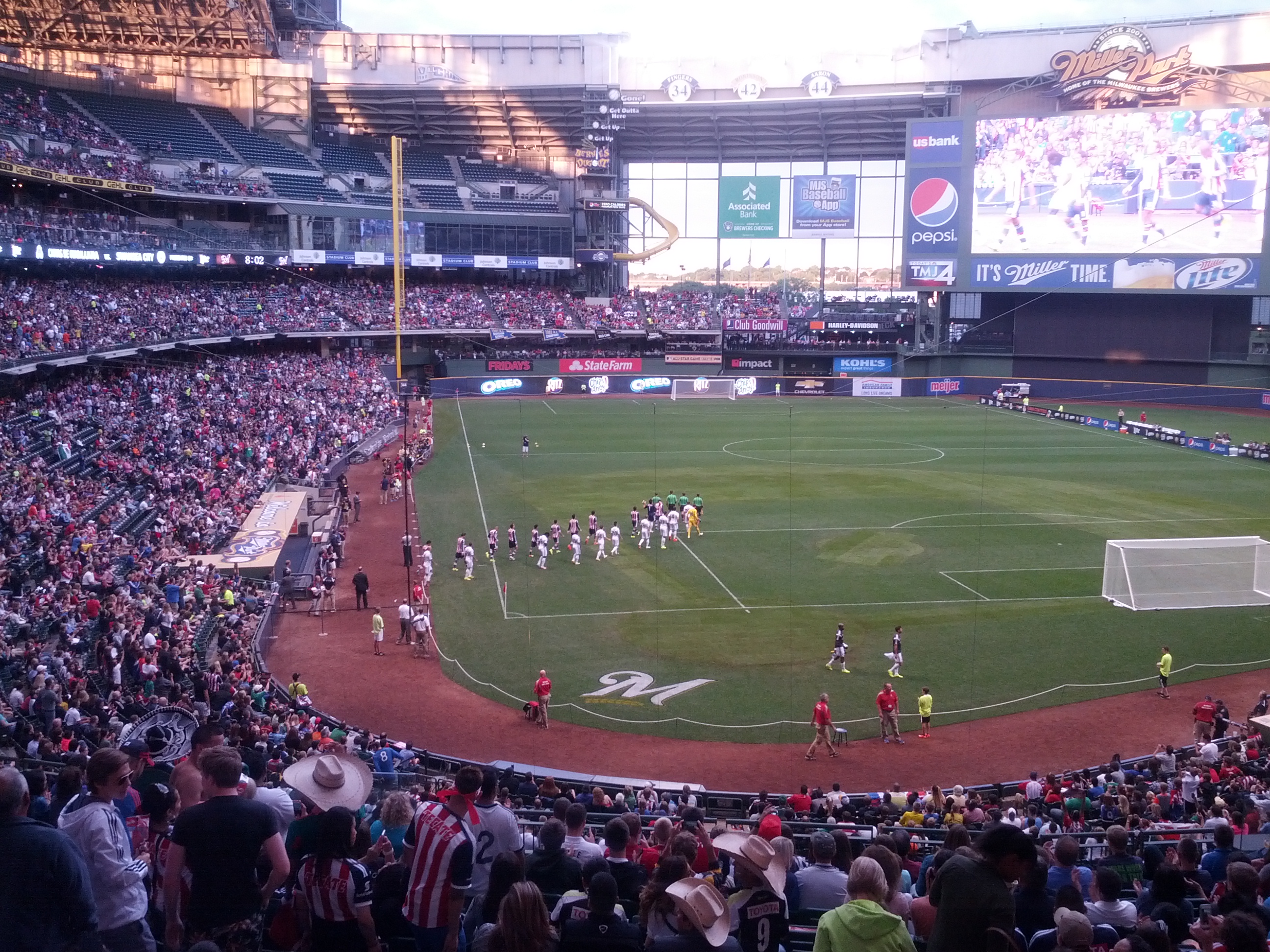 Chivas and Swansea City players take the field for the first soccer game at Miller Park in front of a crowd of 31,237.