Rose Lavelle didn't have a goal or even an assist during the CONCACAF Under-20 Championships.

But the University of Wisconsin midfielder claimed the top individual award after helping her team to a perfect performance.

Lavelle won the Golden Ball, given to the tournament's most valuable player, as the U.S. blanked Mexico 4-0 in Sunday night's final in George Town, Cayman Islands.

The Golden Ball was determined by the tournament's technical study group, which wrote that Lavelle "was a driving force for the Americans throughout the competition. She was quick to regain possession and demonstrated sharp intellect in the transition to offense."

The U.S. shut out all five of its opponents, outscoring foes 29-0 in cruising to its record fourth regional title and third in a row. Lavelle played the full 90 minutes in the final, her fourth start at the tournament.

"I was really shocked when I was announced as the tournament's MVP as I thought there were other players from our team that did very well," Lavelle said. "I always think I can do better, but I think I was solid throughout the tournament, so I guess that somebody saw that and here I am."

U.S. coach Michelle French, though, had a different reaction.

"I was not surprised, as I see how she works in every training session that we have and she is just so special to us," French said.

Katelyn Rowland was the Golden Glove winner as the top goalkeeper, while McKenzie Meehan shared the Golden Boot as the goal-scoring leader with Mexico's Tanya Samarzich. Lavelle and Rowland were among the six U.S. players named to the tournament's Best XI, and the Americans also won the Fair Play Award.

Both finalists already had clinched berths in the FIFA Under-20 Women's World Cup, which is Aug. 5 to 24 in Canada, thanks to their victories in Friday's semifinals.

Costa Rica also earned a spot with an amazing victory in the third-place match, scoring twice in the final 19 minutes of regulation and adding four more in extra time in a 7-3 win over Trinidad and Tobago. Canada qualified for the Under-20 Women's Cup automatically as host.

From CONCACAF.com - Lavelle stands out in an impressive crowd

Editor's note: This article has been edited from its original version to reflect information that became available after posting. 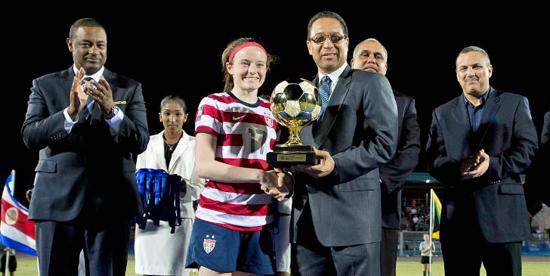 University of Wisconsin and U.S. midfielder Rose Lavelle receives the CONCACAF Under-20 Golden Ball from Alden McLaughlin, Premier of the Cayman Islands, on Sunday night. Photo courtesy of CONCACAF