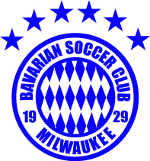 Kendrick Tyson scored on the penultimate kick of the match as the host Quad City Eagles claimed their second stoppage-time victory in as many days Sunday in Riverdale, Iowa, slipping past the Milwaukee Bavarians 2-1.

"I couldn't tell you how much injury time there was, because I wasn't allowed to be on the bench anymore," said Bavarians coach Craig Peltonen, who was sent to the stands after protesting a call in the 86th minute. "So I'm not sure. The clock stopped at 91 and I don't know why there was so much more time."

While Peltonen clearly didn't see eye-to-eye with the match referee – more on that later – the official also played a role in the sequence that led to Tyson's 93rd-minute winner.

The Eagles' goalkeeper punted the ball, a Bavarians player headed it back up into the air, it fell to the ground and as it bounced back up it hit the hand of a Quad City player, Peltonen said. However, no handball was called.

"The referee said to our player, 'I'm not going to call that at this time of the game,' " Peltonen said. "The guy definitely had an advantage there. If it bounces back up in the air, we're challenging for it again."

Instead, Quad City – playing with 10 men because of a red card in the final minutes – got the ball to Tyson, who broke in alone on Milwaukee goalkeeper Jacob Bye (Whitnall) and finished for his third goal of the season and another late win: the Eagles (6-0-0) scored in the 91st to beat the Minnesota Twin Stars 3-2 a day earlier in Brooklyn Park, Minn.

"We got stretched out and we shouldn't have," Peltonen said of the sequence. "We were too high up the field, we didn't drop off and the guy got behind us, so we probably should've fouled him. So it was just a domino effect."

Interestingly, Peltonen said Tyson was booked for taking his shirt off while celebrating the winning goal, and that meant a red card because he had been cautioned earlier in the match. He'll miss the Eagles' next NPSL match, at the Madison 56ers on June 15.

The Bavarians (2-2-0), who lost to Quad City 3-0 on May 19 in Glendale, took the lead about 10 minutes before halftime despite the home side having the better of the play in the first half.

"He was on the inside right and took a look over his shoulder and hit a diagonal ball to Justin Laird," Peltonen said. "They were stepped high and so we got behind and Justin Laird came in on the goalie and put one past him.

Quad City pulled level in the 59th off a set piece, as midfielder Jon Sandoval – who scored the late winner Saturday in the Twin Cities – got to Tyson's corner kick at the near post and flicked a header past Bye to the far post.

"It was a very nice goal, he did well with it," Peltonen said.

Both teams had chances to go ahead during the 90 minutes, with UW-Green Bay's Cheenuj Shong (Milwaukee Ronald Reagan) firing wide on an open opportunity from 7 yards out, and Bye making a big save to deny Quad City.

Peltonen said he was sent away from the sidelines after voicing his displeasure with a no-call. He explained that center back Dusty Page (Kettle Moraine Lutheran) was attempting to shepherd a ball over the endline when an Eagles player took him out. When the referee declined to even whistle for a foul, Peltonen spoke up.

"I wasn't personal, I wasn't abusive at all, I didn't use foul language," he said. "I was just yelling because I was 50 yards away going, 'You need to do something about that, you can't just let that happen. You have to protect the players.' And he comes and says, 'Hey, you leave, right now.' So what am I going to do, argue with him?

"I've had my share of run-ins with referees over the years, although I have mellowed as I've gotten older ... I know when I cross the line – and I have. I'm the first one to say I've put my foot in my mouth a few times, but I really didn't.

"I thought (the refereeing) was poor. ... I just thought this guy let a lot of dangerous stuff, off-the-ball stuff go."