Pretty much everybody walked out of Breese Stevens Field pleased Saturday night following an international friendly between the Madison 56ers and SV Blau-Weiss Wiehre Freiburg.

56ers coach Jim Launder thought the exhibition gave him some points to work on with his team as it starts its National Premier Soccer League schedule in earnest. The German side, meanwhile, were genuinely thrilled to score their first goal on their U.S. tour and felt they acquitted themselves well.

Goals by Carlos McCrary, Jed Hohlbein (Middleton/UW) and Claudiu Aionesei in an 11-minute stretch spanning halftime gave the home team a 3-1 victory in front of about 500 fans.

Hohlbein and Aionesei, two of 11 changes Launder made at halftime, scored in the 52nd and 53rd minutes as the 56ers won their first international match since 2007.

"I thought they were a solid team, well organized," said Hohlbein, who is Launder's assistant in addition to his playing role. "I think just athletically, we have better athletes and I think you could see in the second half we broke them down more."

Blau-Weiss Wiehre, which clinched the Kreisliga B Staffel 3 title and promotion to the ninth division of German soccer last week, was coming off a 2-0 loss to the Quad City Eagles on Wednesday.

The blue-clad visitors defended deep, challenging the 56ers to break them down, and looked to counter attack.

"We played very defensive, because we didn't know if they were very fast players," Blau-Weiss Wiehre player-manager Jan Lindemann said. "So it's better to stay very deep in your own half and then go through and play for the counter."

That strategy worked well for much of the first half, as Madison dominated possession but created few dangerous chances. And those they did create were handled by Blau-Weiss Wiehre goalkeeper Joona Lehtinen.

Then surprisingly, the German side took the lead against the run of play in the 28th minute.

Madison center back Matt Balshaw and goalkeeper Ryan Onwukwe both went to deal with a long ball on the right side. Onwukwe came outside the box and nearly collided with Balshaw, who slipped, leaving Dominik Butzbach alone with the ball at his feet and the goal vacant.

Butzbach, Blau-Weiss Wiehre's top goal scorer, made no mistake from 15 yards out and all of his teammates - including Lehtinen - raced to celebrate with him.

"It was a lucky goal," Butzbach said. "I don't know what happened, it just was there and the goalkeeper came through and I hit it. For me, it was very surprising. But that's football."

UW-Milwaukee's Laurie Bell nearly found the equalizer in the 36th, firing from close range on the right side of the box, but Lehtinen made a great save to preserve the lead.

The 56ers finally broke through in the 42nd - ironically enough off a counter.

Madison cleared out Blau-Weiss Wiehre's only corner kick of the night, and the ball found its way to Bell on the right side. He got it to college teammate Patrick Ruhland (Mount Horeb) at the top of the box, and Ruhland played McCrary in on the left side.

The Creighton forward worked around a defender, then sent a left-footed shot to the far post past Lehtinen to tie it at 1.

"It was pretty tough," McCrary said of trying to break down the Blau-Weiss Wiehre defense. "We just weren't finding the final thing. I think once we decided we wanted to play quickly and move the ball a little bit better, it started looking better.

"I don't think we were really worried - yeah, they scored a goal, but it was a mistake, it was unlucky. We had plenty of time left and I felt like we could have even scored a couple more."

Launder used the halftime break to bring on a new lineup - the teams had agreed to open substitution for the friendly - and do a little teaching.

"I felt like we played too slow in the first half, too predicatable," he said. "Everything was in front of them, we didn't get in behind them and they dropped in a lot. We went over some ways to break that up at halftime, with both the guys that came off and the guys that went on. I thought they applied that very well."

It didn't take long for the 56ers to put that lesson into practice.

UW's Derek Pitts (Middleton) was involved in both goals, serving in crosses behind the Blau-Weiss Wiehre defenders - that was one of the tips Launder offered in how to attack against the deep-defending team.

First, Pitts sent a ball in from the left side that Hohlbein headed past Lehtinen to the far post for his 58th career goal, extending his team record. A minute later, Pitts was on the other flank and looked to connect with Hohlbein again. A Blau-Weiss Wiehre defender tried to head it away, but the ball fell to Aionesei, unmarked on the left side.

Aionesei went with the latter choice, his volley flying past Lehtinen to the far post for his first goal with the 56ers. He dedicated his "perfect" goal to his younger brother, whose birthday is Sunday.

"That was a great strike," Hohlbein said of Aionesei, who was injured for much of last season. "He had a very good game. He's fit this year and it's making a big difference."

Lehtinen kept it a two-goal match the rest of the way, but Blau-Weiss Wiehre generated very little going forward.

"I think first half we did very well," said Lindemann, whose team heads to Chicago on Monday for matches against the Green-White club and the Chicago Inferno of the USL Premier Development League to wrap up their U.S. tour. "I think in the second half, we were too tired. No power anymore. They changed 11 players, bring a new squad in, so that was hard for us. I think we played a good game, it was fun."

Launder enjoyed it, too, for different reasons.

"We got a lot out of it," Launder said. "We wanted to use it as a preparation for our season.

"We've got some things to work on. But now I've seen us under certain competitions, so I know pretty much now what I want to work on. It's like the old saying, 'You've got to have a game to get ready for a game.' I think we're in a good stage: I've seen us against a team that high pressed us, I saw a team that played middle and now I saw a team that dropped way back and tried to counter. It gives me some things that I can apply."

The 56ers have two road matches next weekend, at the Milwaukee Bavarians (1-1-0) on Friday night in Glendale and against the Minnesota Twin Stars (0-2-0) on Sunday afternoon in Brooklyn Park, Minn.

The game against the Bavarians originally was scheduled for Saturday, but was moved up a day, making the travel situation a little better for both teams - Milwaukee plays at Quad City on Sunday afternoon. 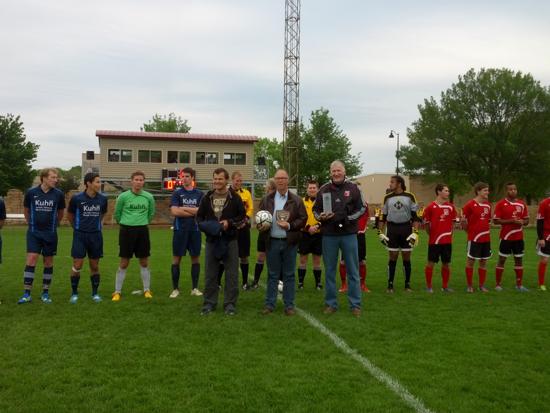 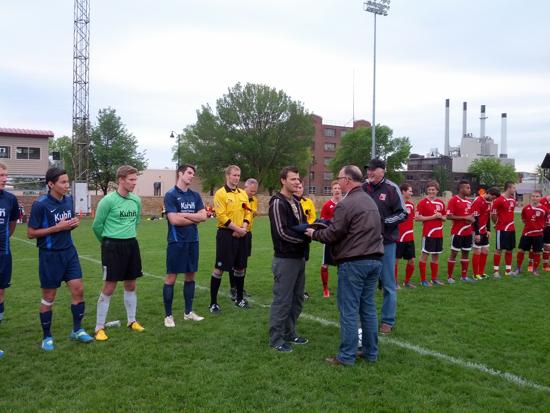