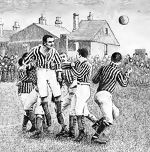 Drawing of what a soccer match in the late 1800s might have looked like. Image courtesy of Goal-Post.

It was a short article on Page 3 of the Oct. 16, 1866, edition of the Waukesha Freeman, tucked in toward the bottom of the first column between items about a cow in Walworth County that sold for the incredible sum of $287 and a brief editorial imploring local politicians to take their speaking appointments seriously.

MATCH GAME AT FOOT BALL – There was a match game at foot-ball played between the students of Carroll College and the young men of Waukesha, on Thursday last. The challenge was given by the College boys. The others had the first phase of direction in which to kick but this was changed every time. Seven games were played, of which the college boys won five. The players on the College side numbered 22, on the other side 25 (and were altogether larger men.) The whole game was well contested, and lasted nearly and hour and a half. The young men of Waukesha have challenged the College boys to play them next Thursday at 3 P.M. on the Fair Grounds, and the challenge has been accepted.

What's so important about those 125 words, written a year and a half after the end of the Civil War? They provide the details of a fascinating piece of Wisconsin, and national, soccer history that is largely unknown.

Carroll's 5-2 victory – goals were referred to as "games" – is the earliest known game played in the United States under the 1863 London Football Association laws. Those rules are considered the start of Association football, which would commonly become referred to as soccer in the U.S.

Yes, it might be hard to believe, but the first known soccer game in America was played in Waukesha, Wisconsin, 146 years ago Thursday, on Oct. 11, 1866.

First game hard to pin down 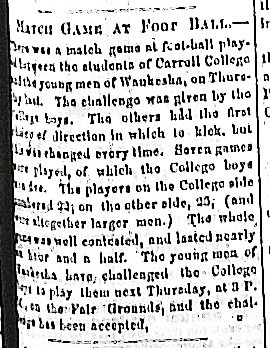 Just when and where the first soccer game was played in America is a challenging question for historians, especially because the word "football" was used to describe sports that closely resemble the modern-day games of soccer, rugby and American football – along with hybrids of the three.

However, the match between the Carroll boys and Waukesha Town team is recognized as the first game in the country by Roger Allaway, who was the historian for the National Soccer Hall of Fame, and the U.S. Soccer Federation.

Allaway compiled a list of the earliest known matches in 44 states for his blog on the BigSoccer website, using research done by Melvin I. Smith. His reaction to the Waukesha game being the first one on record was one of surprise.

"That game, it is kind of an anomaly," said Allaway, who was a newspaper copy editor at the Detroit Free Press and Philadelphia Inquirer. "It is farther west, much farther west than you would expect."

The match in Waukesha was nine days before a game in Hartford, Conn., one in which the Sophomores and Freshmen from Trinity College played to a 1-1 tie.

Smith, a retired meteorologist from Asheville, N.C., politely declined to be interviewed for this article because he was busy doing more research on the history of football in America.

He has written two books on the topic and recently released several papers on the subject, and is loathe to speak in such absolutes as to declare something a "first." Also, it is worth noting that Smith and Allaway don't always agree on how to classify events.

In an email, Smith wrote that a major problem with researching soccer, rugby and football are dates that have been "etched in stone. ... Hopefully, 11 Oct. 1866 will not become another huge date for America." 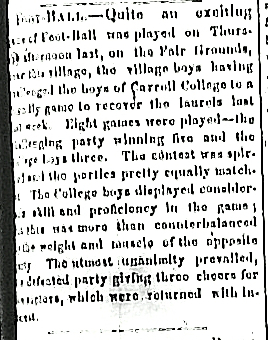 As noted in the article, Carroll and Waukesha Town agreed to play a second time.

The Oct. 23, 1866, edition of the Freeman – the then-weekly newspaper was founded seven years before the games, and a yearly subscription cost $2 – had a recount of the Oct. 18 rematch. Unfortunately, some words from that article have been rendered indecipherable over the years.

FOOT-BALL – Quite an exciting game of foot-ball was played on Thursday afternoon last, on the Fair Grounds near the village, the village boys having challenged the boys of Carroll College to a ... game to recover the laurels lost last week. Eight games were played – the challenging party winning five and the College boys three. The contest was spirited and the parties pretty equally matched. The College boys displayed considerable skill and proficiency in the game ... this was more than counterbalanced by the weight and muscle of the opposite ... The utmost unanimity prevailed, the defeated party giving three cheers for the victors, which were returned with in kind.

The Waukesha County Fairgrounds have moved several times since the first County Fair was held in 1842 in what was then known as Prairieville – the village was renamed Waukesha in 1847.

Maps from 1859 and 1873 both show the Fairgrounds on the southeast edge of the village on the grounds of what was the old state industrial school. That area south of the Fox River is now near Saratoga Park, which fittingly enough has a small soccer field along with softball diamonds that used to play host to the WIAA state tournament.

While the location of the second game was clearly noted in the Freeman articles, the site of the first match wasn't spelled out. However, "I think it's a pretty good guess that they were both on the same site," Allaway said. 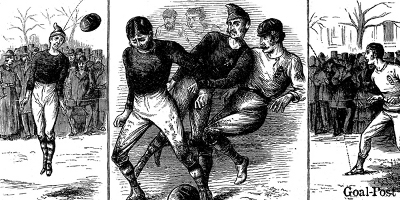 Drawings of what a match in the late 1800s might have looked like. Image courtesy of Goal-Post.

One big question is how the Carroll boys came across the 1863 London FA laws.

Allaway wondered if perhaps a Carroll student was from England or took a summer trip there and brought them back with him. A search of the school's available student information from 1866 didn't show any Englishmen registered at Carroll.

However, one way they could have gotten the rules is by picking up a "dime novel," which were popular in that era.

"Beadle's Dime Book of Cricket and Football, Being a Complete Guide to Players and Containing All The Rules and Laws of the Ground and Games" was published in New York in 1866.

The 50-page book, edited by Henry Chadwick, contains rules and instructions for playing football (soccer), rugby and The Eton Game, which is somewhat similar to American football.

(Interestingly, a copy of the book is on display at the Pro Football Hall of Fame in Canton, Ohio. Also, Chadwick, a native of England who moved to New York when he was 12, was called "the father of baseball." He is credited with inventing the boxscore and was elected to the Baseball Hall of Fame in 1938.)

The football rules spelled out in Beadle's book essentially are the 1863 London FA laws, with some selective editing. The section on football starts: "Simply stated, Football is a game in which a number of players, divided into sides, or parties, endeavor to kick a large ball from one part of a field to another, the side which succeeds in kicking it beyond a certain boundary, at either end of the field, winning the match. Let us endeavor to describe football in such a way as to enable lads on cricket-fields and village greens to play with pleasure and healthful profit."

So what exactly would someone have seen had they ventured out to the field 146 years ago?

"It's nothing like the soccer we know today," Allaway said. 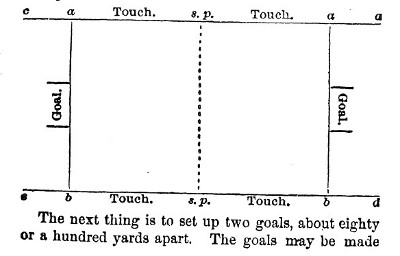 Diagram from Beadle's Dime Book of Cricket and Football. "The lines, a, b, are the goal lines, and those on each side, c, d, at right angles with them, are the touch lines; while the centre dotted line is marked on either side (s. p.) by side-posts."

Let us allow Chadwick to take us through soccer in 1866.

Many of the rules are the same as they are today:

But there were some pretty major differences, too.

Those goals didn't have crossbars, by rule, and goals could be scored as long as the ball was kicked between them at any height.

As noted in the Freeman article, teams traded sides after each goal scored. Also, there weren't any guidelines for the number of players on a team, hence the 22 vs. 25 match in Waukesha.

If the ball was played into touch, the first player to touch the ball would win the throw-in, which had to be at a right angle to the boundary line.

The original offside rule was very limiting. "When a player has kicked the ball, any other player, on the same side, who is nearer to the opponent's goal-line, is out of play, and may not touch the ball, nor in any way prevent any other player from doing so, until the ball has been played by one of the other side; but no player is out of play when the ball is kicked off from behind the goal-line."

Perhaps the most glaring difference was the fair catch. Any player on either team could grab the ball when it was in the air and get a free kick for his team at that spot, as long as he made a mark in the grass with his heel after coming down with the ball.

Chadwick also notes that each team should have a "safe player stationed just inside the goal" – the earliest goalkeepers, if you will, but without permission to use their hands.

As far as how the game played out, he wrote: "Sometimes the players advance in a compact body, shoulder to shoulder, so that it is nearly impossible for the ball to pass beyond them; or occasionally both sides form into a ring and tussel and scramble for the ball till one contrives to kick it away to a distance; and so hotly is the contest pursued, that often a goal is not won during two hours' play."

Of course, there's only so much you can get out of a book, as Chadwick noted in closing the section.

"Written instructions can do no more than give readers general information as to a game like football. More will be learned in an hour's play than can be acquired from a week's teaching on paper," he wrote.

"Therefore we hope that our friends – whom we number by tens of thousands among all the boys of America – will profit by our advice and the hints here thrown out, and speedily organize football matches in the fields about the neighborhood of their homes; for the game is a thoroughly good and health-giving one, played anywhere."

The rest is history

As Allaway noted, those two games in 1866 are an anomaly in the historical record.

While perhaps it wasn't the speedy process Chadwick espoused, soccer has grown into the biggest participation sport in the U.S.

And to think it all started in Waukesha. 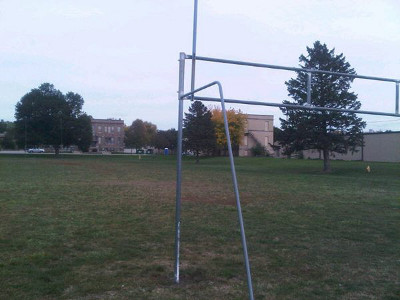 The Wisconsin Soccer Historical Society, a group formed by myself and veteran soccer executive Peter Wilt of Whitefish Bay while doing research for this article, will celebrate the 146th anniversary of the first game on Thursday at the soccer field at Saratoga Park, 707 W. College Ave., in Waukesha.

A brief ceremony is scheduled for 4:30 p.m., at which point we'll announce future plans for the location, to be followed by an exhibition match involving players from SC Waukesha, using the 1863 London FA rules for half the game and the modern laws for the other half. The public is welcome and encouraged to attend this free event.

Special thanks to Melvin I. Smith; Roger Allaway; Peter Wilt; Eric Vanden Heuvel of the Waukesha County Museum; Amelia Klem Osterud, the Interim Library Director, Archivist and Digital Projects Librarian at the Carroll University Library; Diane Klare, the Head of Reference at the Wesleyan University Olin Library in Middletown, Conn.; and Paul Brown, the Editor of Goal-Post, for their assistance with this article