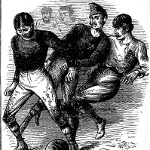 FOOT-BALL – Quite an entertaining match game of foot-ball was played on Thursday afternoon last near Saratoga Park in Waukesha, on the 146th anniversary of the first known match in the U.S. using the 1863 London FA rules. After a lengthy review of the original laws of the game with referee Sal Garcia, the boys of SC Waukesha had the first phase of direction in which to kick but this was changed every time. Six games were played, of which the SC Waukesha men – primarily former Carroll University players – won five. The players on the younger side numbered 15, on the other side 14 (and were altogether larger men.) Adhering to the 1863 rules proved somewhat challenging for both sides, who eventually embraced events such as fair catches, races with opponents to balls that rolled over the end lines or out of bounds, throw-ins that were at right angles from the touchline and an offside rule that prevented forward passes to teammates. Players in possession of the ball had four options from which to choose: pass backwards, pass sideways, dribble or shoot. Goals were counted for any shots that were between the posts, at any height, and players made sure to secure a free kick for their side by making a mark in the grass with their heel when coming down with a fair catch. The whole game was well contested, and lasted 20 minutes; the sides then played 20 minutes using the modern rules of soccer.

Before the match, Peter Wilt and Eric Anderson from the Wisconsin Soccer Historical Society announced plans to raise funds to have a plaque or historic marker placed near the field to recognize the 1866 match, in which a team of Carroll students defeated a Waukesha Town team 5-2. It is likely, but not confirmed, that the match was held at the Waukesha Fairgrounds – which was in the general vicinity of what is now Saratoga Park.

The group hopes to hold an annual friendly match on Oct. 11 to commemorate the historic occasion, and will strive to have a full-sized, FieldTurf surface installed on the location by the 150th anniversary in 2016. 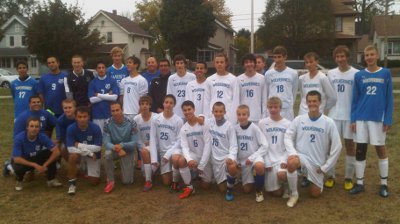