The Milwaukee Marquette boys soccer team took on all comers last fall and was nearly perfect, finishing 24-0-1 against a schedule that included top teams from California, Washington, D.C., Missouri, Indiana and Illinois in addition to Wisconsin competition.

The Hilltoppers didn't win a mythical national title – they ended up third in the ESPNHS Powerade Fab 50 and fourth in the National Soccer Coaches Association of America poll – but their performance led a major honor for their coach.

Steve Lawrence was named the NSCAA Coach of the Year for high school boys private/parochial schools at the organization's annual convention earlier this month in Kansas City, Mo.

"I wasn't expecting it, but it was a great honor," said Lawrence, a Brookfield native and former Hilltoppers standout who has a 120-19-9 record in six seasons at the helm of his alma mater.

Lawrence, 31, is the fourth Wisconsin prep coach to claim the national award, joining his high school coach and mentor Bob Spielmann, who was honored in 1995 and was with him at the ceremony in Kansas City. On the girls side, Waukesha Catholic Memorial's John Burke (2001) and Madison Edgewood's Chris Martinelli (2010) also have won the award – all four were honored in the private/parochial school division.

Lawrence acknowledges that the situation at Marquette is different than most in Wisconsin.

After all, the Hilltoppers have won eight WIAA state titles along with two runner-up trophies in the past 12 years, those going along with 15 championships in the now-defunct Wisconsin Independent Schools Athletic Association. Since Spielmann started the program started in 1979, Marquette has never had more than seven losses in a year and this was the Hilltoppers' fourth unbeaten season.

"It's definitely a different atmosphere than probably a lot of coaches are used to," said Lawrence, a four-year starter at sweeper for Marquette University who played two seasons with Milwaukee Wave United in the United Soccer Leagues A-League.

"I always have a lot of talent to work with at Marquette High School, having such a rich tradition of soccer. ... It's a coach's dream having good players to work with consistently, year in and year out, that are dedicated and willing to work and buy in to what a coach is teaching them."

But being part of such a program presents different challenges, too.

"A lot of times, I think it's looked at that if you don't win a state championship, that year at Marquette High was a failure. Personally, I don't buy into that," said Lawrence, who also is a project manager at Fiserv and works with Under-11 to Under-14 teams at Elm Grove Soccer Club. "Sure, I want to have the highest expectations; we want to have the target on our backs. It doesn't bother me that that's kind of how people look at it. It's a challenge that we like to take on.

"But in the end, like any other coach, the way I look at it is if the kids are improving from the beginning of the season to the end of the season, you're helping make these kids better people overall and helping them try to get to that next level of soccer ... that's what I'm really trying to do. If you get the national rankings, that's all great, but I kind of see those as added bonuses. It's the development that we're really concerned about."

The Hilltoppers outscored opponents 107-14 on the season, including 29-2 with five shutouts in six WIAA playoff games. The only team not to lose to them was Carmichael Jesuit (Calif.), which played Marquette to a 3-3 tie in California in its regular-season finale.

"It was tough competition and its tough for a high school kid who is traveling and managing his studies and all that and still being able to perform," Lawrence said. "It's a great accomplishment for those boys."

So was the 2011 team the best Hilltoppers' side in program history?

"A lot of people have asked me that, and I think it's hard to say this one's the best team in Marquette history, just because there have been so many good teams ... but they definitely have to be considered," Lawrence said.

"I think you've got to put this team right up there with the top teams. They went undefeated, they played top competition from all over, they proved that they were good not only in our state, but also against the top teams from California, from Kansas City and other places. The difference nowadays is since we're able to go to more national events, we get more of a comparison on how we actually are."

And while standouts such as forwards Patrick Hodan and Joe Naughton and midfielderLogan Andryk – all first-team picks on the Wisconsin Soccer Coaches Association Large Schools All-State team – will graduate, Lawrence said he expects Marquette to be competitive again next year.

The Hilltoppers will continue to travel as much as allowable under WIAA rules and play a challenging schedule, with at least one new opponent: Cleveland St. Ignatius, which has won three of the past four Ohio High School Athletic Association Division I state titles, is set to make a trip to the Chicago area to face Marquette in a non-conference match in October.

"I think we'll have a good squad coming back," said Lawrence, whose team will head into 2012 with a 36-game unbeaten streak (35-0-1). "We had some special players from this year that we'll miss, but we had a lot of good players this year that were juniors and sophomores and we had a good freshman class. I would have high expectations for next year. ... There's plenty of talent to work with." 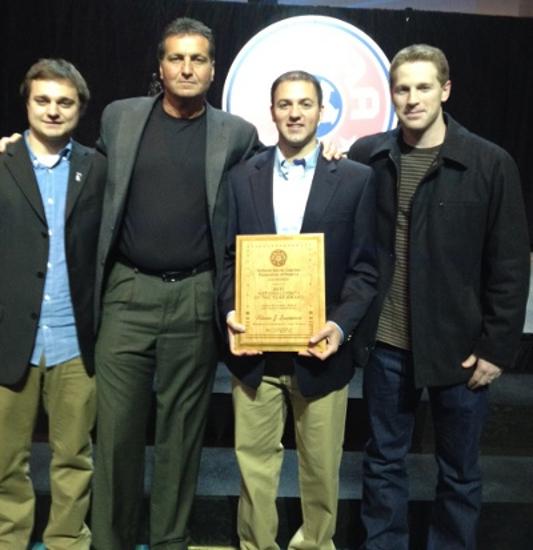